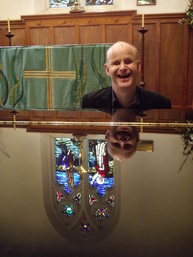 I have always written, from prayers and poems to songs and hymns. I was delighted to have ‘Dunstan Carol’ included in the ‘Carol Our Christmas’ book, published in 1996. My hymn writing recently began to take on a life of its own, and I discovered a deeply rooted compulsion to communicate and explore my faith through music. In May 2014, much to my delight, I received a grant from the New Zealand Hymn Book Trust. This was the catalyst for this very exciting project entitled ‘Seeds of Faith’, which comprises sixteen of my original hymns, in the form of a CD, Hymn Book and Lyrics Book, which is offered to the worship communities of New Zealand and wider audiences.

Why ‘Seeds of Faith’?  I wanted to explore the themes of creating, planting, nurturing and growth, rooted in the soil of God's creating, redeeming and sustaining love. In the book, I quote from a variety of Biblical texts including Isiah 61:11  For as the earth brings forth its shoots, and as a garden causes what is sown in it to spring up, so the Lord God will cause righteousness and praise to spring up before all the nations.

The music book could be used by churches with a pianist / organist. The booklet of lyrics could be used as a song book or for meditation or prayer. And the CD is an interpretation of the material from the music book. It demonstrates my individuality as a musician and includes some vocal tracks which are close to the original hymn music, and some instrumental tracks which give free rein to my jazzical creativity.

The hymns have been selected to represent the stages of our journey in faith and life. Planting and Nurturing are the first two sections, followed by Developing, and finally Blossoming, each emphasising our ongoing growth in community. Just as there are many varieties of plants and trees, so there are many varieties of musical styles included.  We have everything from the calypso "You Are the Risen Christ" to the reflective "Batteries"; from the playful "Sleeping" for toddlers; to the reflective and yet dancing "Rest In Peace"; and on to the raunchy blues rock of "God Is Awesome". ‘Seeds of Faith’ is a celebration of variety.
It is a mini musical garden of Eden.

While I am a Christian in the Anglican expression, this book and disc is absolutely ecumenical. After all, we are all working in God's field.  We are all planters and nurturers. We are all in “This Ministry Thing” together.

For details of how to purchase copies of the CD, Hymn Book or Lyrics Book, please go to the 'Contact' page (find it in 'more...' on the tabs above).

WHAT COLIN GIBSON SAID at the end of the first concert of the Seeds of Faith series, November 7th 2014, Queenstown
"I do want to say a few things about this marvellous musician, composer, player, the lot. This is a star man! He’d be good anywhere in the world.

One of the tests of a really tremendous hymn or song is it gets outside the place where you perform it, and where people can’t hear you sing it, and it still works. And that’s why your Dunstan Carol went straight into the New Zealand collection of carols. Once we’d read it, once we’d sat about and played it (we had about five pianists have a go at it) and then a couple of people who wanted to write descants to it, we knew straight away that this was going to be one of the classic New Zealand hymns. And it is! Tonight, I’ve been privileged to hear the second one. Because I reckon that the ‘Winter Carol’ is going to do exactly the same thing. I know it’s going straight back to Dunedin and my choir are going to be singing it!

You’ve been surrounded by a glittering collection of really top quality musicians, but it’s one of your geniuses (and you’ve got several of them) that you form the centre, the living heart of a group of people. And just as tonight you’ve brought in the whole audience and got us going, so with the group you’ve been working with for some time now. You’re the centre of it, you’re the life of it. Two lovely singers, thankyou both for what you’ve sung, a flute player (I’d love to have a flute player!) a magnificent trumpeter, and the happiest bass player I’ve seen in years.

So it was no difficulty at all for the Trust to say ‘yes’ when we heard of this project. You’d already persuaded us with the ‘Dunstan Carol’ and one or two of the other ones that I knew about. So we said immediately (this is people like Guy Jansen, Marnie Barrell, Roy Tankserson) we all got round the table and said ‘Will it go?’ We said ‘Yes, it has to go!’. And it’s come to fruition. We think it’s brilliant! Beautiful piece of recording, and a hymn book that everybody should take home with them and start singing. But you won’t play it as well as this man did! That was always our problem with Guy Jansen. He’d sit down and say ‘Let me see what I can do with that’ and he’d do it wonderfully. We’d think ‘Oh yes, we’ve got to have that one’. And this man does exactly the same thing. Brilliant, brilliant jazz player, lovely style. So thanks for inviting us up. We had a lovely trip up, through exactly the kind of world you’ve got in your songs – the world of central Otago, Queenstown, and the smell of the rain, and the scent on the breeze, all of those things. And I’m so proud that when this went north to the other island, I could say that this is Otago. It is, for ever I think, in the words of the carol. And I swear that the Winter Carol will do the same job.

So thankyou, thankyou, it’s been a marvellous night, a whole night’s worth!"