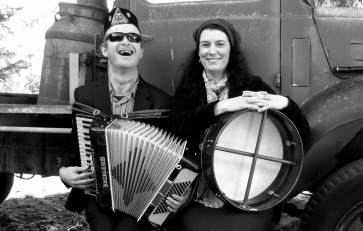 It's a superb mix of haunting tunes and toe-tapping jigs!
Karen on vocals, Irish whistle, wooden flute and bodhran, Mark on piano, piano accordion and vocals.

Tracks include traditional tunes and some up to date compositions, including one by Mark: 'Papa Westray'. He named it after the Orkney island of the same name, which was the home of the Rendall family, Mark's maternal ancestors.

Mark's middle name is Rendall, and he also named his music company in honour of the family name.
Mark says:
"What happens when you put one of Otago's most hauntingly beautiful and creative Celtic flautists, penny whistlers, and Bodran exponents, alongside one of Central Otago's most eclectic and inventive pianists?  You have Southern Celtic.  We are a duo who combine both jazz and Celtic elements.  If you like your blues with some Blarney, and if you dig your jig with some swing, Southern Celtic is your kind of thing.  Just as the Central Otago mountains are both majestic and rugged, so are Southern Celtic.  "And who are these people?" I hear you cry.  It is none other than Karen Reid fluting and singing, with Mark Wilson providing the rhythmic and harmonic backdrop to this panoramic soundscape; the delight that is Southern Celtic."